CNN and their history with "crosshairs" plus John King's apology

CNN's John King is attracting a lot of notice -- and some ridicule -- in the blogosphere for his on-air apology after a guest used the word "crosshairs" during a report on Chicago politics Tuesday.  (The guest, a former Chicago reporter, referred to two rivals of mayoral candidate Rahm Emanuel, saying Emanuel is "in both of their crosshairs.") "We were just having a discussion about the Chicago mayoral race," King told viewers.  "My friend Andy Shaw…used the term 'in the crosshairs' in talking about the candidates out there. We're trying, we're trying to get away from that language. Andy is a good friend, he's covered politics for a long time, but we're trying to get away from using that kind of language.  We won't always be perfect, so hold us accountable when we don't meet your standards." 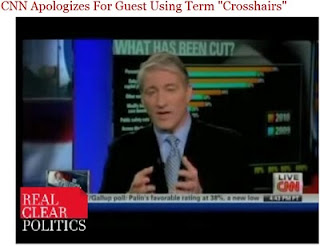 King's statement comes after widespread discussion of whether Sarah Palin's now-infamous "crosshairs" map targeting vulnerable Democratic candidates in last November's elections somehow caused the shooting of Rep. Gabrielle Giffords in Tucson January 8.  There has been plenty of that kind of speculation on CNN, including on Tuesday, the day of John King's statement, when one brief discussion of Palin used the word "crosshairs" five times.

Now, King says, CNN is "trying to get away" from such terms, suggesting that in the wake of the Tucson shootings, such language should no longer be part of the public conversation.  But if Palin is to blame for using crosshairs in her much-discussed map, then CNN, by its own use of the allegedly inflammatory term "crosshairs," might also share some blame for creating the atmosphere that led to the violence in Arizona.  A look at transcripts of CNN programs in the month leading up to the shootings shows that the network was filled with references to "crosshairs" -- and once even used the term to suggest the targeting of Palin herself. Some examples:

"Companies like MasterCard are in the crosshairs for cutting ties with WikiLeaks," said CNN Kiran Chetry in a December 9 report.

"Thousands of people living in areas that are in the crosshairs have been told to evacuate," Chetry said in a December 21 report on flooding in California.

"He's in their crosshairs," said a guest in a December 21 CNN discussion of suspects in a missing-person case. 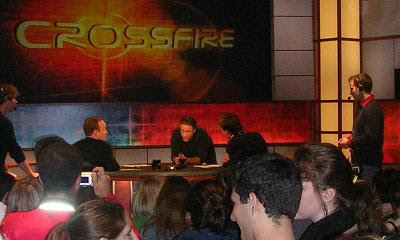 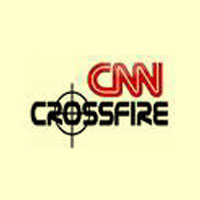 I agree the rhetoric of violence is all around, but in terms of John King's statements, perhaps he has a point. The point here is not this grand discussion of certain discourses; there should be some level of compassion or tact after a serious event. I think there is a long tradition of media showing respect by avoiding specific terms after catastrophic events. Because language is so adaptable or transient, metaphors are used often for impact or emphasis. For example, newspaper headlines are often crafted to avoid such related metaphors after a natural disaster. You wouldn't want to use words like 'flood' to represent a large number of letters or interest in an issue, if there had recently been a natural disaster in which people were killed, injured or misplaced by flooding.
Crosshairs is a term very closely related to the Tucson event, and as such, I agree with John King... the terms are offensive when the tragedy is still so recent. In terms of the bigger discussion... perhaps not so much.