Police in Florida questioned teenager regarding Obama Joker posters. Is this fair? How about these? 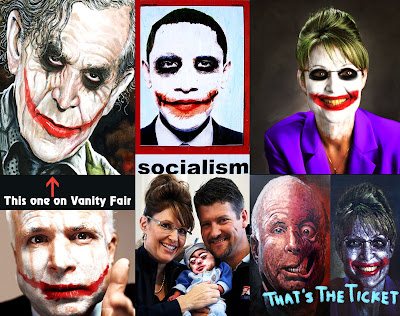 Police in Florida have questioned a teenager who admitted to hanging dozens of posters depicting President Obama as the Joker, and suggested that the prank could be part of a nationwide contest launched by a conservative talk show host to brandish the posters everywhere.
Clermont Police Capt. Eric Jensen said the suspect who was taken into custody but not charged, told investigators he affixed some of the posters recently found on the city's light poles, public and private buildings, overpasses, mailboxes and other locations.
"We're still trying to gather more suspects and ascertain more witnesses," Jensen told FOXNews.com. "We haven't made any arrests yet."
Jensen said witnesses told investigators a "couple of kids" were also responsible for affixing the posters along with the unidentified teenager. Charges of vandalism could be considered, he said.
Continues here
Posted by Amarissa at 7:53 PM